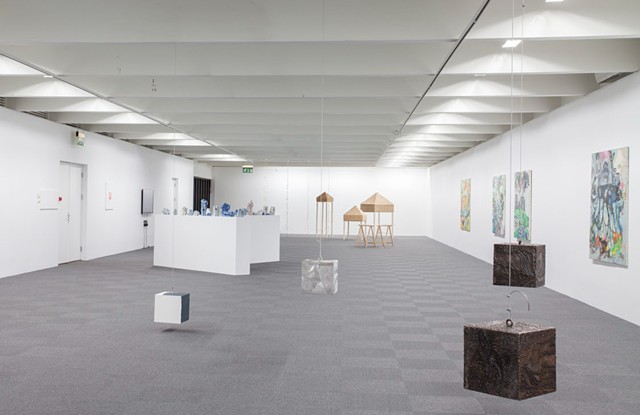 The Only Wau is Up

The Only Way is Up

In our current era, established principles and ethical codes are at risk as Europe faces increasing challenges from xenophobia, economic shifts and environmental changes. When the time comes to take action, historic human rights agreements are revealed as mere empty words. Fear has come to overshadow reason, resulting in closed borders and deportations. Homophobia and the oppression of women are often used as justifications for such political actions, without the close questioning of the personal stances of the promoters of such rhetoric.

In the works of Finnish artist Otto Karvonen, birdhouses have been created in the shapes of European detention centers for refugees. Since 2010, Karvonen has documented the architectures that imprison people whose only crime was to leave their homeland. Norwegian artist Vanessa Baird visualizes the feeling of undefined and latent racism in her caricatured drawings of bodies of African descent floating in the water. In a video work by Ethiopian-Norwegian artist Mekdes W. Shebeta, the artist interviews refugees who testify to the large number of people who have been forced to sell internal organs after traversing the Sahara in order to pay the price of continuing their journey across the Mediterranean. And Crying Man, an artwork by Jorunn Myklebust Syversen, is an example of what may meet them on the other side – a white male jogger in the midst of a breakdown over his own existence.

The term Tyranny of Goodness has been used by the Norwegian media to label individuals working to achieve more humane border politics. Is the constant flood of scare-tactic propaganda skewing the reality of the situation, or is society as bad as the media would have us believe? Some go so far as to say that our civilization as a whole is threatened. Paradoxically, Western society is statistically safer than ever before. Into what information should we anchor our reality?

In American artist Katy Grannan´s film clips, everyday moments are happening in nowhere places. Dedicating her films to those that depend on parking lots and roadsides as the main set in their lives, Grannan takes the viewer beyond the label of an addiction or diagnosis and into intimate portraits of existences that are no different from our own. Finnish artist Maiju Salmenkivi also engages the viewer in her expressive paintings by placing responsibility for environmental pollution on both individuals and corporate sources. Whether it a beer festival or a factory, the duality of progression and destruction never seems to cease. The audience is confronted by a barricade of porcelain objects, now rendered useless, in Norwegian artist Irene Nordli´s installation Chain of Sorrow. Once serving as functional molds at the Norwegian Technical Porcelain Factory in Fredrikstad, the objects have been stowed away in the factory´s attic and transformed by the artist from their outdated shapes into aesthetic objects of decay.

There is no doubt that society as we know it is changing rapidly, both in terms of demographics, economics, and climate, and it is still too early to tell the outcome of these societal shifts. The face of change is blurred, and this uncertainty leads us to imagine the outcome for ourselves depending on our creativity, or lack thereof. The Only Way Is Up presents artworks that in various ways relate to major existential changes.

Thank you to Sørlandets Art Museum for the loan of Irene Nordli´s artwork.