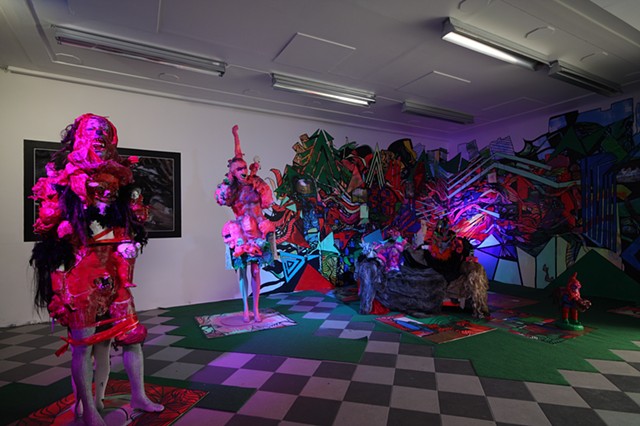 Monica Winther
Solo show
The Mind is Given to You, You are Not Given to the Mind
< previous next >

You wake up and notice the room surrounding you. The body is paralyzed and you are unable to move. Something is pressing against the chest. Hallucinations in an otherwise familiar room, a feeling of somebody being present, somebody grabbing you. A fear spreads in your body as you realize: you are about to die. For an indefinite amount of time you are completely paralyzed, as if you were attached to the mattress under your body. The anxiety of these nocturnal experiences, somewhere between the conscious and the unconscious, creep slowly in on you and you begin to doubt your own senses.

The phenomenon is called hypnagogia, or sleep paralysis, and stories about this terrifying but fascinating state extends far both in a geographical time-spanning sense. The condition can hardly be explained, and is still an unexplored borderland where science has not stretched. While these experiences, before the Enlightenment, were looked upon as rare religious states of ecstasy, in recent centuries they have been repressed as abnormal mental disorders. Sleep paralysis is difficult to understand without connecting biological theories with cultural theories, and an explanation of the phenomenon therefore exists beyond the Western Enlightenment project, which is based on the rational, thinking, human being. Our culture worships an artificial duality between body and mind. It is also paradoxical that we think of Romanticism as an ended historical era, whilst at the same time being drawn all possible forms of spirituality. The West has a relatively short tradition of suppressing what we can not explain. And to areas where science or words do not extend, art does.

Sleep paralysis is also thematized within the field of art, especially in the Romanticist explorations of the subconscious. Bearing the insight that we still know relatively little about the human mind, Winther appropriates these motifs in the installation The mind is given to you, you are not given to the mind. Winther’s interest in this phenomena might be caused by the human mind´s potentially unexplored areas, together with a willingness to pick at what should not be picked at, to do what one should not do, and express what few dare to express. Winther’s expressiveness, which is simultaneously beautiful and disgusting, opinionated yet unreliable, is liberating.

Her use of colour and psychedelic abstract patterns in her drawings and paintings, abandons what David Batchelor has described as the Western culture´s chromophobia, a deliberate neglect of colours by associating them with `the feminine´, `the childlike´, `the Orient´ and other trivial cultural references. A rejection of everything we wish not to be, at the same time blatantly confirming what we are. Winther’s universe is a visual chaos that cultivates precisely these oppressed matters. What apparently looks like the debris from Western consumerist culture, are objects that over time have been invested with Winther’s personal memories and stories, arranged together with biological material from the human body.

There is a strong link between the physical and the psychological in Winther’s art, which is explored by both a convincing seriousness and sense of humour. To confess the self through a performative act is brave. The exhibition title, which is taken from a Yogi Tea- slogan, celebrates the banal. In our fear of the inexplainable, we strive for control. But even the title’s comforting quasi-religious and cliché-ridden words inhabit a central aspect of doubt.

Is consciousness really in our control and we can rule over our minds?

Helga Nyman The exhibition is supported av Bergen City Council and The Norwegian Arts Council. Monica Winther (b.1976) works with performance, sculpture, wall painting, text, sound, video and drawings that often culminates in site specific installations. She graduated from the Bergen Art Academy in 2007 and has since exhibited in spaces like Stenersenmuseet, Tafkag, Henie Onstad, Kunstsenter, Rekord, Nationaltheatret, Kunstnerforbundet, ILYW, Oslo City, Dortmund Bodega, LIAF, Tidens Krav and Preus Museum. Together with Kjersti Vetterstad she is also known as Mom in the infamous artist duo Mom&Jerry. Winther lives and works in Oslo. Helga Nyman (b.1983) in an art historian specialized in contemporary art. She received her education from the university of Linköping in Sweden and the university of Bergen. Helga Nyman works at the Stavanger Art Museum.