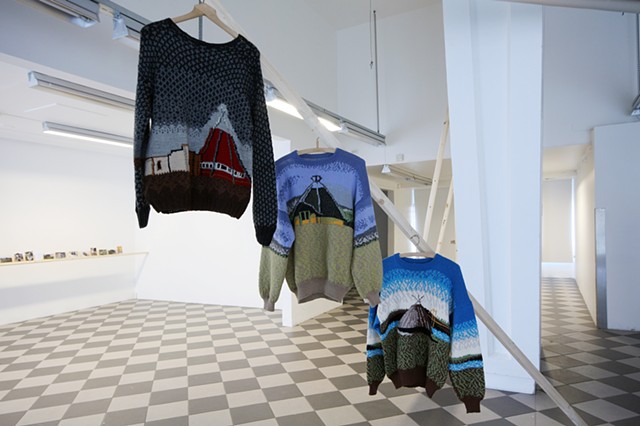 A doghouse –and an expression for social truths, cultural stereotypes, global challenges and universal problems. The same doghouse –a story of wind and weather, which particular materials are easily available, peoples way of doing things, the tissue of meaning that people associate with the need for finding a substantial basis under their feet and roofs over their heads. Simply said, a doghouse as a journey within the most essential pragmatism in lived life, but simultaneously within the most complex discursive material of vast social, political and cultural constructions. Still, only a doghouse.

Joar´s project Doghouse, one of two visual typologies that investigate self-sufficient constructions in the Northern architecture, is charged with an almost provokingly quiet presence, –both in the essential and the deconstructed. This methodology resembles one he previously used in The Indigenuity Project (in collaboration with Silje Figenschou Thorsen), whilst traveling around in the Northern areas with a camera, a notebook and a tape recorder. The method emerges as though imprinted in the work, not unlike anthropologist sketches of `the Others´ way of doing things – it is just that Joar´s motif is not `the Other´ (his own Sami background from indigenous community annuls this gaze), his subject is the improvised, nomadic and temporary architecture. To Joar there obviously also lies a philosophical question in the provisional building traditions, as an architechtonal idiom between the necessary material and immaterial needs. And with a particular interest for the marginal, is there also present a political discussion, together with an opposition here?

The magic in Joars aesthetic lies in the apparently simple way of just being there, in a natural way. “There” is equally together with Sami wives who have knitted lavvu-patterned woolen jumpers, knitting patterns and a typology of 20 lavvu constructions that compose the work Saami Shelters. The simple everyday craft contrasts the enormous architect drawn lavvu-buildings, and thus become symbols of so much else rather than the daily life they mimic.

Joar is of a generation artists with Sami background having realized there are no essentialist sizes. The art piece or “Sami” has no essence. The absence of traditions, the introduction of lifestyle, and a (chosen) freedom from tradition, represents a post-structuralist critique towards the idea of essence.

Though at the same time people´s lifeworld is complex and primordial. It answers to our basic reality, the world we live our daily lives in, the world we experience, talk about and take for granted. With this exhibition it seems difficult to ignore the feeling that there is something essential here, something that is left when else is taken away. Joar withdraws the dualism between essence and the constructed. It is not a simple position, but it offers a non-confrontational platform for points of views and dialogues anchored in both the risk-laden lifeworld as in the well known complexity. Joar has made a third space, which houses nothing less than The Northern Pragmatisms Universal Capacity.

Thomas Kintel The exhibition is supported by Bergen City and the Norwegian Arts Council Joar Nango (b.1979) is an architect with a degree from NTNU in Norway. His works explore the boundary between architecture, design and visual art. Thematically speaking, Joar Nango relates to questions of indigenous identity, often through investigating the oppositions and contradictions in contemporary architecture. Recently, he has worked on the theme The Modern Sámi Space through, amongst other things, a self-published zine series entitled Sámi Huksendáidda: the Fanzine, design project Sámi Shelters and the mixtape/clothing project Land & Language. He is also a founding member of the architecture collective FFB, which works with temporary architecture in urban contexts. At the moment he lives and works in Tromsø, Norway Thomas Kintel (b.1975) is a freelance culture analyzer and art mediator, based in  Bergen, Norway. Holding an MA degree in Cultural Studies, he has been writing and  lecturing on issues concerning the Sámi art world. He is interested in borders  surrounding and defining artistic activity, and in social and cultural  delimitation within different communicative spaces.