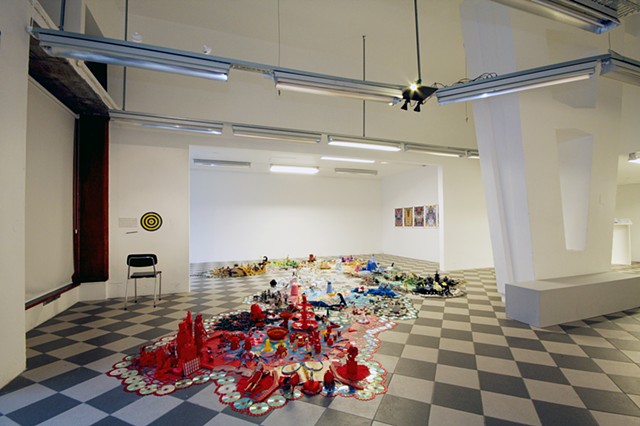 The starting point of Existentialism was an acknowledgment that life is meaningless, and that the individual must seek his or her own meaning. Neither nature, society or God has determined the kind of life we shall have. In «The Myth of Sisyfos», the French author Albert Camus established that salvation through religion or sense is by no means the only way to accept an unreasonable fate. Sisyfos had insulted the Gods, and the punishment he was given was to roll a boulder up a steep hill. And every time the boulder reached the top it rolled back down the hill again. However, Camus distinguishes that Sisyfos could be concieved as blessed, because he managed to create meaning in his own absurd existence. In his labour he understands what he has to do, although the labour lacks any higher significance. Sisyfos realizes the meaninglessness of existence but accepts it´s conditions with human dignity. Camus writes that becoming aware of our useless existence enables a deeper insignificance. Human life is absurd, and the human quest for profound connotation is in vain, he states. But when we become conscious of hope being an illusion, we experience an emancipating capability which enlivens us.

The exhibition «The Chosen» mirrors today´s hunger for self-realisation and our wish to appear as unique and outstanding human beings. Many experience this as an existential driving force– to be «a chosen» gives pleasure to one´s consciousness. One is then met with expectations and progress, enjoys recognition from others and gains the possibility to realize ambitions and achieve experiences that feel heightened. When the pursuit ends with a positive result, one can at last appreciate the floodlighted moments, either they come from your closest,– or even better from the public sphere.

The exhibition consists of new works by Heidi Nikolaisen, Steingrimur Eyfjord and Mona Nordaas. Each in their own way they discuss how one´s choices influence existence´ meaningfullness. Nikolaisen deals with different religious mythologies as a base for societybuilding, identity and social constructions. The viewer is confronted with claims of doomsday as well as a searching for a new existence. Eyfjord approaches a more commercial aspect and turns his attention towards the audience. We are all a chosen one. Nordaas problematizes the consequences of being an outsider, as a result of the term «the chosen» being a justifying tool for suppression and abuse.

« The Chosen» is curated by KNIPSU og supported av Bergen City Council and The Norwegian Arts Council. Heidi Nikolaisen (b. Bodø, 1973) works with video, text, photigraphy and installation. She has had solo shows at Nordnorsk Kunstnersenter (2011), By the Way (2006) og Galleri f15 (2003) and participated i group shows such as BGO, Bergen Kunstmuseum (2010), On articulating Works & Places, Arts in Marrakech (2009), Nordnorsken (2008), Vice Versa, Christiansands Kunstforening (2007). Nikolaisen has her educational background from Kunsthøgskolen i Bergen (2002) where she also teaches. Heidi Nikolaisen lives and works in Bergen.