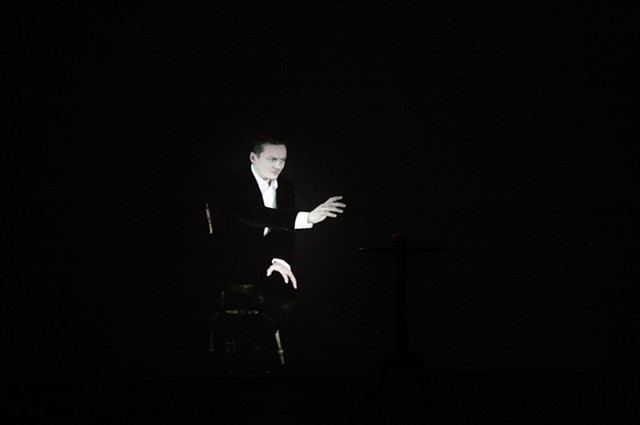 Vanitas symbols point towards perishability and our earthly life’s inconsistency. The questions these symbols raise cannot be bound to either time or place, and since they can neither be answered, the questions retain their actuality. Our need to understand the meaning of life and death will always be present, and the grey zones of our mortality are just as significant now as they were, for example, in the late Middle Ages. When the Finnish artist Juhana Moisander works with these thematics today, it is with new vigour and a modernized artistic language, where his historic pattern clearly is emphasized. His work contains a series of recognizable symbols, such as the apple symbolizing temptation, or death personified as a blackly clad skeleton.

Despite the work´s recognizable symbols, it might be through their illusionary dramaturgy that the viewer is reminded of his own mortality, by the fact that Moisander creates seducing video installations that activate both the gallery space and the viewer. The thinker and semiotic Roland Barthes ascribes the photograph an immanent falseness because it can only show what no longer is. The photograph, together with the video recording, will always be a frozen moment only giving evidence to the past. It will be burdened by a certain melancholy precisely because it is essentially fleeting. This is also distinct in Moisanders work, where projections of human figures (often the artist himself) in a more or less natural scale are placed side by side with physical objects in the exhibition space itself. In The Temptation from 2011, we can for example see two men projected on either side of a physical table with an apple upon it. The darkly dressed figure on the left points in a commanding manner at the apple, by which the man on the right carefully stretches out his hand before changing his mind. The distinction between reality and projection becomes veiled, and as viewers we experience an awkwardness when we see these ghostly, diluted, black and white creatures trying to interact with the physical scenery of the gallery.

One knows so very well that the projection will never manage to manipulate the objects, but the idea is disquieting. Through their representation they are reduced to two-dimensional objects, although they at the same time refuse to submit to this existence. Instead the projections behave as a part of our reality. Their eerie vividness actually does not convince us that they are physically present, and exactly because of this the situation is experienced uncomfortably. A conflict occurs between our perception and the acknowledgement that it is not real. The cognitive dissonance the viewer experiences stems from the psychoanalytic idea of the uncanny,– a paradox that arises when something is perceived as both familiar and unfamiliar at the same time. The idea that these projections could take place in our world is followed by the thought that we could risk being caught in theirs,– and questions attached to perishability and life´s inconsistency are suddenly hard to ignore. ´The living know that they shall die, but the dead know nothing´ (Ecclesiastes 9,59).

Espen Johansen This exhibition is supported by the Norwegian Arts Council, Bergen City, FRAME and the Finnish-Norwegian Culture Institute. Juhana Moisander (b.1977) is educated at the Helsinki University of Art and Design and the Tampere Polytechnic. He lives and works in Helsinki. Moisander has participated in various exhibitions such as Forum Box, Helsinki (2011), Format, Malmø (2009), Kluuvi Galleri, Helsinki (2009), Titanik, Turku (2008) (soloshows), and Logomo, Turku (2011), Rauma Art Museum, Rauma (2010), Turku biennial (2009) og Moscow biennial for young artists (2008) Espen Johansen (b.1985) is a writer and an art historian. He has a BA in Media Studies and a MA in Art History with a specialization in contemporary art. Johansen lives and works in Bergen.